Home » Book Review » Pot Luck–title is a play on words, but I won’t spoil it for you!

Pot Luck–title is a play on words, but I won’t spoil it for you! 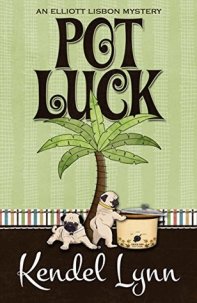 Pot Luck by Kendel Lynn is a cozy mystery with a fantastic plot–so many twists and turns, surprises, and suspects that it makes your head spin. Elliott (Elli) Lisbon is the Director of the billion-dollar Ballantyne Foundation.  Since she often finds herself in the middle of other people’s problems, she is also in “hot pursuit” of her PI license with only “four thousand hours” until she becomes official.

The story is sprinkled with humor through references to Elli’s OCD regarding cleanliness  issues and to her temporary responsibility for two adorable pug puppies, Colonel Mustard and Mrs. White, named for characters in the board game Clue. Interactions with other characters also provide amusing dialogue.

The setting is a beach resort area, Sea Pine Island, near Savannah, providing both exotic beach life and glimpses of higher and lower echelons of Southern society. There is a love interest for Elli as former FBI agent Nick Ransom, who is currently working as a lieutenant in Sea Pine Island, interacts with Elli.  Tight lipped, he is actually not a valuable resource in solving cases, but Elli is attracted to him and is not deterred in her investigative work by his efforts to discourage her for her own safety.

There is a subplot involving Lucy, a former friend of Elli’s, who is currently working as a PI. The backstory may be explained in a previous book as this is the fourth in the Elliott Lisbon Mystery Series. In Pot Luck they have a strained relationship, and Lucy has an deep resentment of Elli. She blames Elli for not keeping in touch over the years, but their issues seem to go deeper than is explained in this book.

I would like to extend my thanks to netgalley.com and to Henery Press for giving me the opportunity to read this book in exchange for an honest review.

Notes: The author included several phrases that I found irreverent. One example is “For the love of Jesus in a jumpsuit.”  I realize this would not bother all readers and is mild compared to that found in many books. It actually would not keep me from reading another book by this author, but I did not appreciate its inclusion nor did I think it added authenticity to the work. It seemed strained.

My thoughts were jumbly which set my very mild OCD on edge.  Like the very sharp edge of a very tall cliff over a very deep canyon.