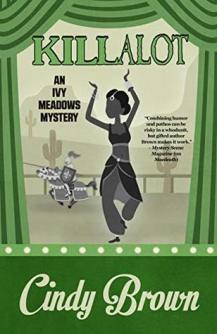 One of the things I like best about the Ivy Meadows Mystery Series is the breadth of concept, the latitude, that the author Cindy Brown has given herself and her main character, Olive Ziegwart, known by the stage name of Ivy Meadows. Ivy is an aspiring actress and to put bread on the table while working whatever roles she can nab, Ivy works part time for her Uncle Bob, who owns his own P.I. agency. Uncle Bob has always been nicer to her than her own parents, and he is training her in detective work. Because of her dual employment, Ivy legitimately encounters lots of interesting cases, and the books can have a variety of settings and characters.

In Killalot, the title being a takeoff on Camelot, Ivy is hired to investigate a murder which she and the rest of the audience at a jousting contest actually witness at a Renaissance Faire. You would think it would be easy to solve a crime you observe, but that is not the case.

I learned quite a bit about Renaissance fairs and birds of prey which were popular in medieval times such as falcons. There is quite an intermix of interesting characters between the Faire and Ivy’s work for a playwright who is trying to create an innovative musical production based on both the Kennedy’s and Camelot. Ivy gets to stretch her acting talents as a belly dancer and as “Marilyn Monroe.”

Danger lurks in the darkness and secrets abound in both worlds. Meanwhile, Ivy has to reach deep inside herself to conquer an old phobia and discover what is more important in her personal arena—her career or her relationship with Matt. Both her mentally disabled brother, Cody, and her Uncle Bob have some words of wisdom for her as she struggles in body, mind, and soul for resolution and peace in this cozy mystery. A good series; a good book!

I would like to extend my thanks to Edelweiss and to Henery Press for giving me the opportunity to read this book in exchange for an honest review.

Notes: #6 in the Ivy Meadows Mystery Series, but works well as a standalone.

I knew that living in denial was no good, but I also knew that it was a valuable tool, a way of putting off the tough emotional work until you were strong enough to tackle it.

“After Cody’s accident you went from being a sunny outgoing kid into a little snail curled up in a shell. The only time you poked your head out was when you were onstage. And even then, that was as a character, not as yourself.”

A ball of warmth began to glow inside me, making me warm and light and near to bursting with happiness, like Scrooge when he realizes it’s still Christmas; like George Bailey when he realizes he still has his wonderful life.

By lghiggins in Book Review, Cozy, mystery on November 30, 2018.
← Murder with All the Trimmings–catering mystery with a focus on dancers Death and Daisies–magic and murder in Scotland →