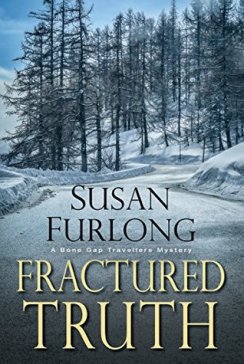 Brynn Callahan suffers mental effects from being part of a Marine search team for the dead. She and her dog Wilco both received physical injuries from an encounter with an IED in Iraq. Retired from the military, they work as a team for the local sheriff.

In Fractured Truth, Brynn has been chosen for her job, despite a less than stellar work record due to PTS and associated addictions, to act as a liaison between law enforcement and the people group she was born into. She is half Traveller or Pavee, originally an Irish roaming group who settled in the Appalachian mountains in Tennessee. She is only partially successful in this role as the Pavees view her as an outsider and traitor for working with the police. She is helpful, however, in that she understands their customs and perspectives.

Brynn and Wilco are called upon to locate the body of a girl found by a cross-country skier. Wilco is successful and later, thanks to his sensitive nose, is able to locate another woman’s body who police suspect is in a river. The plot is very complex with many suspects. While investigating these crimes, Brynn is also dealing with PTS issues that she tries to overcome with alcohol and prescription drugs. In addition, she has past relationships that color her attempts to establish a new life in Bone Gap. She suffers discrimination from the Pavees and from some of her “settled” coworkers who look to blame the Pavees for problems. The Pavees, in turn, ostracize Brynn and her grandmother.

Fractured Truth has a good solid plot. It is a fascinating mystery, if somewhat gruesome at times. Author Susan Furlong, who has a talent with words, has created an interesting character in Brynn Callahan. I didn’t find her likeable or unlikeable, but I did find myself rooting for her in her struggle against her personal demons. Her battles are deep and painful, and unfortunately there are many returning soldiers who literally share the same torments. The book ends with the criminal cases solved but some loose ends that will carry the reader into the next book in the series.

I would like to extend my thanks to netgalley.com and to Kensington Books for giving me the opportunity to read this book in exchange for an honest review.

Notes: 1. #2 in the Bone Gap Travellers series, but works well as a standalone.

2. Since I review a lot of cozy mysteries, I want to point out that this book is not a cozy mystery. It falls in the traditional mystery series category. Some might classify it as a Police Procedural or a K-9 mystery. It is quite successfully all of these things!

A little smirk played along the corner of her lips. She enjoyed causing trouble. Gone was the withering flower, replaced by little Ms. Mean Girl. Who was the real Winnie? I had no idea. This interrogation was giving me mental whiplash.

“War is a series of relentless extremes. Boredom to certain death. No between. Anxiety becomes a part of who you are. You never turn it off. You do, and you’re not on your game, not able to save your own thankless hide, let alone your buddies.”

We kept our boundaries tight and adhered to a strict moral code, but somewhere along the line, we’d forgotten to allow for humanness. Rules and rigidness had replaced love and mercy.

By lghiggins in Book Review, Fiction, mystery, Police Procedural on January 14, 2019.
← The Only Woman in the Room–beauty, talent, and brains Woman of Courage–a glimpse of Quakers in 1837 →