Home » "Chick Lit" » The Year of Starting Over: A Feel-Good Novel about Second Chances and Finding Yourself.

The Year of Starting Over: A Feel-Good Novel about Second Chances and Finding Yourself.

The Year of Starting Over 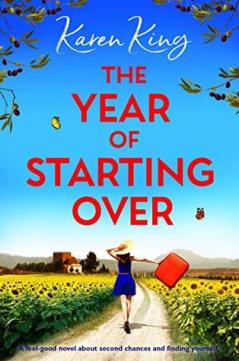 I don’t know any honest person who won’t admit, at least to themselves, that there is something that they wish they had done differently. Since there are no “do-overs” in life, I am grateful for second chances and that is what The Year of Starting Over is all about. Its subtitle is A Feel-Good Novel about Second Chances and Finding Yourself.

In Karen King’s novel, Holly is confronted with both the need and opportunity to hit the reset button on her life when it becomes apparent her relationship with boyfriend Scott will never lead to the type of loving marriage her Nanna and Pops enjoyed. Her job as a care assistant for the elderly is not the path to fulfillment for Holly as an artist. Holly is left money by her Pops giving her a chance to change those circumstances and begin living for herself.

Holly has to sort through relationships as she reinvents herself in this gentle romance. She travels from England to Spain to help her friends, Fiona and Pedro, establish an artists’ retreat. With an adventure in another country, the interesting characters, and a female lead who steps out of her comfort zone, you may well be pleasantly reminded of Under the Tuscan Sun. The plots play out differently, but the feel-good aura is present in both.

I would like to extend my thanks to netgalley.com and to Bookouture for giving me the opportunity to read this book in exchange for an honest review.

Although her family had always praised her designs, Scott had dismissed it as her “hobby” and had never taken much interest.

Holly felt frustrated as she listened to them, wishing she knew the language better. She’d improved since she’d started taking lessons with Felipe, but not enough to understand conversations, especially when they spoke so quickly.

Her family had been pretty poor, he knew that from what she’d told him, but they’d been happy. His family were rich by comparison, but there was no closeness between them.