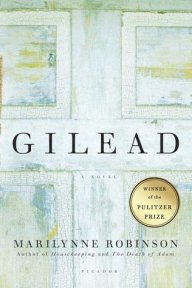 I do most of my reading and reviewing as a solitary occupation until I publish my thoughts on a book. I was glad to have read Gilead by Marilynne Robinson as a part of a book club where we could all bounce our reflections on the book off the mirrors of the impressions of others. The member of our group who suggested this book had read it several times. When I first began the book, I could not imagine enduring more than one reading. I have never liked stream-of-consciousness as a style of writing, and this book is a good example. John Ames, a Congregationalist minister, puts pen to paper to share his final thoughts with his young son, the things he would have told him as he grew, were their age difference not so pronounced. Having finished the book, I reread the first page to gather my thoughts and was amazed at what a perfect beginning it holds, carefully crafted and full of promise.

Although I still don’t favor the stream-of-consciousness style, I appreciate how appropriate it is to this epistolary novel with its many themes. The setting is the Midwestern town of Gilead that was once part of the underground railroad. Racial issues keep popping up at the most unexpected times in this book. Much of the story deals with relationships across generations. Without strict attention, it can be difficult to sort out which generation is being referenced. There are many ministers in the family line, but father and son bonds can be troublesome as the characters struggle to answer for themselves what is required to have a good life. Another level of complication is added in the thread of John’s namesake, Jack, the son of his best friend Robert who is also a pastor. There are undertones of the Biblical story of the “Prodigal Son” in some of those difficult associations. John, who never says anything bad about anyone, will leave behind a loving wife with a mysterious past, a much loved son, and boxes and boxes of sermons. How will he be remembered?

Gilead is not an easy or quick read. Be prepared to reread passages, especially those with theological depth. Some I just had to walk away from; others benefited from group discussion. I plodded through the first half of disparate pieces; I was fascinated with the second half as those pieces came together to form a beautiful design. At some point I probably will reread Gilead after I stand apart a bit and allow the characters of Gilead to become a comfortable part of my vision of “the good life.”

2. There are three other books that involve many of the same characters, but Gilead was written first.

A little too much anger, too often or at the wrong time, can destroy more than you would ever image.

When you encounter another person, when you have dealings with anyone at all, it is as if a question is being put to you. So you must think, What is the Lord asking of me in this moment, in this situation?

I have decided the two choices open to me are (1) to torment myself or (2) to trust the Lord. There is no earthly solution to the problems that confront  me. But I can add to my problems, as I believe I have done, by dwelling on them.

By lghiggins in Book Review, Christian, Historical Fiction, religion on July 9, 2020.
← Under the Radar–extreme bullying On the Lamb–deadly beach party →