A Long Walk to Water–impactful

A Long Walk to Water

You have probably heard of the Lost Boys of Sudan. In A Long Walk to Water, Linda Sue Park tells the story of one of those lost boys, Salva Dut, who even as a refugee himself, took on a leadership role for 1500 boys in their very long, dangerous, and seemingly hopeless journey for survival. Salva, as a young adult, was chosen out of a refugee camp to emigrate to the United States. This book tells how he transformed his desperate situation into a life giving project for the people of Sudan based on hope, faith, and most especially perseverance.

Told in two timelines with apparently disparate plots, this book moves back and forth with both stories progressing forward in each chapter. It begins slowly, but soon picks up the pace and the reader’s interest. The book starts with the tale of Nya, an eleven year old girl in southern Sudan in 2008 who spends her day traveling from her village to a pond to collect dirty water in a jug which she then carries home on her head. She does this twice a day in extreme heat, traversing with bare feet a thorny path to bring home enough water for her family to survive.

Salva’s story also begins in southern Sudan, but much earlier, in 1985, when his village and school are attacked by armed men during an ongoing confrontation between the Muslim government in the north and the rebels of the south. Thus begins Salva’s separation from his family and his struggle for survival.

Although this book is aimed at a younger audience, as an adult I am so glad I read this story which is based on the lives of real people, Salva and Nya and their families. It reads quickly and lays out the need for clean, accessible water for South Sudan, pointing out the many rippling effects of pure water on a community. It also shows how diverse tribes can work together for a common good. The website noted at the end of the book provides more information and gives a practical way for those of us blessed with plenty to help those without the basic necessities.

Notes: 1. The suggested ages and grade levels vary according to printed reports, but in general: Grades 5-9 and Ages 10-14. The book does a good job of recording hardships and violence without graphic details. Because of the subject matter, I would not recommend it for younger children.

2. The reader will find links to lots of videos about Salva and his project at www.waterforsouthsudan.org.

No one in the group had eaten anything for two days. Their water was nearly gone. Only the vision of leaving the desert kept them moving through the heat and the dust.

It did not seem as if the camp could possibly hold any more, but still they kept coming: long lines of people, some emaciated, some hurt or sick, all exhausted.

He felt as though he were standing on the edge of a giant hole—a hole filled with the black despair of nothingness. I am alone now.

It was hard to keep hope alive when there was so little to feed it.

My Real Name is Hanna–extremes of human behavior

My Real Name is Hanna

My Real Name is Hanna is the story of a Jewish girl and her family who live under horrible circumstances in Ukraine to escape death at the hand of the Nazis and others. This book by Tara Lynn Masih has much potential. Many parts of the survival tale are drawn from the story of a real family that had to live underground. The first part of the book bounces around a little and then settles down into a sequential tale. Although it is a sad story, I didn’t really find myself emotionally involved with any of the characters. Parts of the narrative got my attention, such as when family members were in danger. I wanted to see them survive, but mainly I wanted the book to be over.

The author uses words from other languages freely. I like the authenticity of that but I would have appreciated a glossary, and I think young people would find that helpful as well. The area the family lives in has been occupied by many countries so there are competing cultures and languages—Jewish, Polish, Ukrainian, Russian, and German.

I actually found the “Historical Notes” at the end of the book more interesting than the book itself. Unfortunately, the author includes her own political stance on current events in these historical notes. If she wants to put forth these ideas in her book, I would suggest she do it in an editorial type section separate from a discussion of the historical basis of the book. Like the author, I hope the day will come when we don’t need reminders of the Holocaust as cautionary tales against cruelty. I don’t think, however, that it is appropriate to use her historical notes as a platform for indoctrinating young people into her political views. The story should stand on its own merits, and young people are capable of reading the book and making their own moral conclusions.

I would like to extend my thanks to netgalley.com and to Mandel Vilar Press for giving me the opportunity to read this book in exchange for an honest review.

Notes: Interest Level—Ages 12 and up

I see in my mind again those posters in the window, the big red letters, the lice, the blaming of Jews for the war. Someday, someone will betray us. For money, for food, for their own lives spared.

I can now hear what sounds like heavy boots approaching the house from down the lane, grinding the dirt and gravel with their murderous purpose.

When you’re hidden away, with no freedom, you crave news of the outside world as much as you crave food.

Lessons in Falling–finding yourself as a teenager 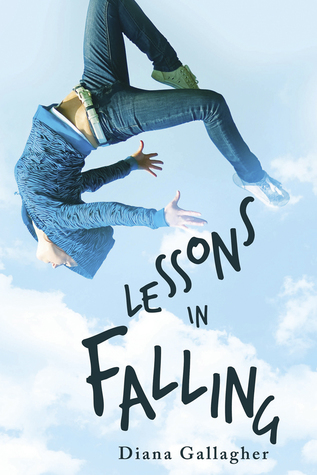 Lessons in Falling has the expert touch of a gymnast in writer Diana Gallagher. Although the focus of the story is gymnastics, the book is so much more. This is not one of those themed books for young readers aimed at an audience of pre-teen and teenage girls who are, were, or want to be gymnasts. The scope of this book ranges from teenage friendships to romantic relationships. It encompasses issues common to teenagers: college applications and scholarships, driver’s tests, depression, texting, work issues, immigration, parental expectations, extracurricular activities, and discrimination. The plot centers around Savannah, an aspiring gymnast who has suffered an injury, and her longtime friend, Cass. It explores their personalities and relationship during their critical senior year of high school. Teenage years are chaotic for many; Gallagher does not oversimplify or exaggerate the difficulties her characters encounter.

I would like to extend my thanks to netgalley.com and to Spencer Hill Press for giving me the opportunity to read this book in exchange for an honest review.

She could go on all day like this, using me as the shoreline that her words beat against.

Yesterday, she comforted me. Today, I’m her anchor. At the end of the day, we’re thicker than humidity in July.

As kids we played together, schemed together, nursed bruised knees and silly crushes on boy bands. She was quiet unless she was with me. Together, chances were that we were screaming as we sprinted into the ocean and laughing as we splashed each other. We whispered together under the trees as the neighborhood kids ran around searching for us in Manhunt, never giving up our spot. I rode my bike to her house when Richard was first deployed, blinking tears out of my eyes. She met me at the curb and grabbed my hand. Although her hand was bony, cool, without calluses, it was just as strong as mine. Sometimes I think she hasn’t let go. She keeps her arm around me now, reminding me that I’m her anchor, that she will run to me if she needs to be safe.